London Stadium statue to be installed 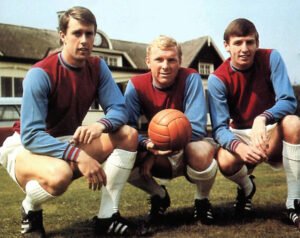 The club says the statue will be located at Champions Place and unveiled as the focal point of the Club’s 125th anniversary celebrations over the course of the next year, as part of their continued commitment to bringing our rich heritage and history to London Stadium the club announced.

The lifesize-and-a-quarter bronze statue will depict the three legends lifting the European Cup Winners’ Cup trophy in 1965, commemorating a performance that catapulted the Club on to the world stage after two second-half goals from Alan Sealey, saw Ron Greenwood’s Hammers overcome German side TSV Munich 1860.s.

Mounted on the empty plinth located directly adjacent to the Champions Place area, alongside a plaque describing the famous European victory and paying tribute to the full line-up of players and legendary manager Greenwood, the statue has been commissioned and designed with the full support and involvement of Sir Geoff Hurst and the families of the late Martin Peters and Bobby Moore, whose daughter Roberta – herself an established and hugely-respected curator in the field of sculpture – has played a key role in the entire process.

Given that planning had already been approved for the installation of the original Champions Statue at London Stadium, the Club has been required to submit a minor planning amendment for the new design.

The Club is pleased to confirm that the formal title of the statue will be chosen by our supporters, via an online vote. Details of the voting process, along with further updates and announcements on the grand unveiling of the statue, will appear on whufc.com in due course.