Manchester United consider Declan Rice “overpriced and too slow”, according to some sources inside Old Trafford. 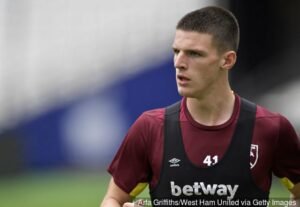 The Red Devils have compiled an extensive dossier on our brilliant midfielder over the past two years, with reports they are ready to make a big money offer this summer – especially if it can include Jesse Lingard in the equation.
Old Trafford sources, however, have informed Claret and Hugh that some United scouts have raised a red flag whether Rice is the optimal midfield target, should Paul Pogba quit the club in the coming weeks.
United want a ‘dynamic’ defensive screen who can also break the lines, with some scouting reports allegedly citing a supposed lack of pace in Rice.
Boss Ole Gunnar Solskjaer is understood to remain a fan of his but United’s under-pressure money men have also identified three other midfielders – all considerably cheaper that £100m rated Declan.
A United source told us: “The scouts have sent back plenty of positive reports on Rice but there are a couple of suggestions he might not have the pace they are looking for, and he’s more comfortable playing side to side, rather than breaking lines like Pogba or Matic do.
“United want to sign at least three players this summer and they are hearing West Ham would demand £100m for Rice, which the people at Old Trafford consider at least £20m too much.”
Whilst Irons would expect interested clubs to try and drive Declan’s price down and, certainly he’s no Usain Bolt, it seems bizarre United’s own spies have  alleged a lack of pace.
Rice puts out plenty of fires before they ignite, which suggests he is far quicker to see things than United’s scouts, judging by their harsh assessment.
Permalink