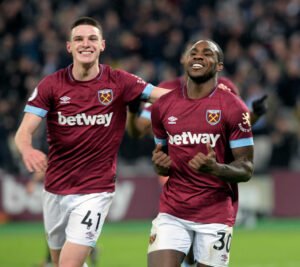 Michail Antonio and the Irons did what good players and teams do…broke the opposition’s hearts!

Mikey scored a brilliant late late goal after a fine run from Declan as the lads came from a goal down to a precious 2-1 win and three points.

Raphina gave Leeds a first half lead before hitting the post after the Hammers faded from a bright opening 20 minutes.

But the massively hard working Jarrod Bowen equalised with a doubly deflected shot before Mikey raced into space to slide a fine goal past the Leeds keeper.

The Elland Road mob will feel hard done by after dominating for periods but the Hammers battled magnificently and at the end had risen one place into seventh,

Antonio saw a couple of early shots brilliantly saved before Leeds took a grip on things from a goal which started via an unusual error from Soucek who gave the ball away while under no pressure and the resulting cross was converted by Raphina.

The Czech midfielder thought he had made amends when scoring later in a fabulous second half performance but Mikey was adjudged to have fouled the keeper.

It was a game which will probably be barely be remembered at the end of the campaign but it was one of those games from which the three points could prove vital .

We were a shadow of ourselves for a long time but such is the spirit in this team that we continue to look a team with a serious future.