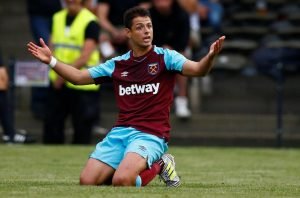 West Ham boss David Moyes looks to have the perfect opportunity to back up his claim that Marko Arnautovic and Chicharito can play together when Stoke City arrive at the LS on Monday evening.

Both Manu Lanzini and Andy Carroll face late tests for the game and are therefore only likely to be included on the bench at best which leaves the manager seemingly with the choice of Joao Mario or Chicharito in the offensive back up role to the central striker.

He also has to decide whether to include Edmilson Fernandes who was disappointing in the clash against Chelsea last Sunday for a game where he will surely want to adopt the most attacking formation possible.

I’d expect Fernandes to be included down the right side to give the side some balance but expect Mario to sit this one out with Chicharito included, probably replaced later by Lanzini assuming the Argentinian is fit.

The match will give us an opportunity to assess the extent of Moyes’ attacking ambition in a game that is there to be won and make us virtually safe.