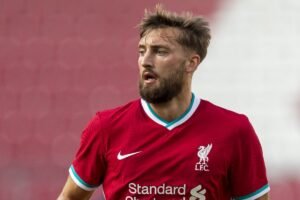 David Moyes is definitely looking at both James Tarkowski and Nathan Phillips with the Liverpool 24 year old now the bigger favourite of  becoming a Hammer.

Although Moyes has not yet submitted list of his winter targets to the board he has mentioned both to backroom staff and Phillips looks the more appealing option at around £10 million.

Liverpool boss Jurgen Klopp has also indicated that he will be available for sale.

Moyes has also considered a bid for the Burnley 29 year old since last season but has blown hot and cold on him over recent months.

However the club may offer £4 million rising to £5 million given he will have just five months before being out of contract.

Anymore than that – coupled with a salary requirement of around £60k on a three year deal with little sell on value- would be too rich for our blood and Phillips looks a better bet by far at five years younger.