Posted by Sean Whetstone on December 12, 2020 in News, Videos, Whispers 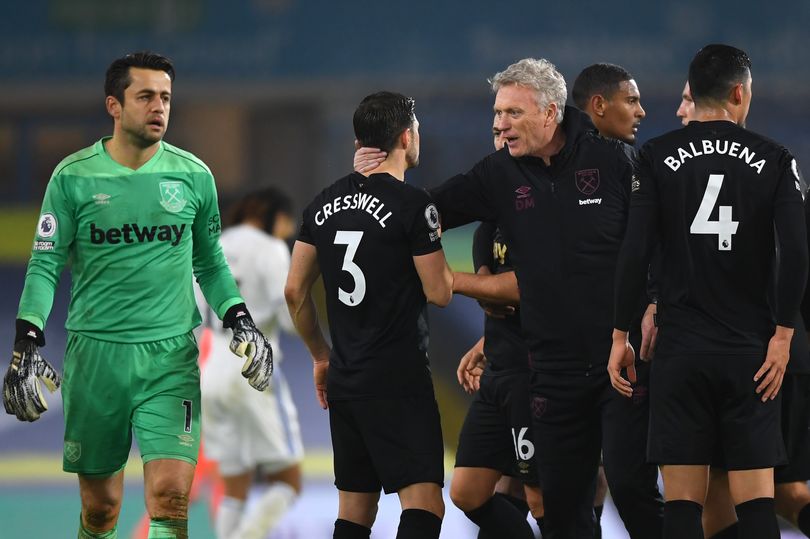 David Moyes gave his post-match presser at Leeds after the Hammers 2-1 away victory and this is what he said:

So much to be pleased with – resilience despite missing chances?

I thought we played well at the time, I thought Leeds did as well but we were expecting it from them, to create lots of chances and to get forward.

I thought their goalkeeper was outstanding with some of his saves and he kept them in the game. We had chances, we had good chances to get ourselves further in front but we didn’t take them.

Tomas Soucek’s running and work rate must be infectious to his teammates?

Him and Declan [Rice] have been so good, their effort, their commitment, every game we have a high standard of steady and consistent performance from them.

We knew he had goals in him, Tomas, we knew when we bought him and thankfully he is getting a few for us.

Two set-piece goals, an area you have targeted to prosper against Leeds?

No, we didn’t, we didn’t even do any more practice than what we would have done, in fact, we did none.

We have prepped other things but we didn’t do any practice on it.

We have great delivery with Aaron Cresswell, we have players that are good in their air but it is a big part of football, scoring from set-pieces and not conceding from them.

They attacked the ball really well and there was a couple more we could have scored from headers.

What did you make of the penalty and how difficult is it for keepers when they can’t move an inch off the line?

I thought it was a definite penalty, there is no doubting that, but I think the decision was terrible. I am still angry about it now that this is the way football has gone, a game we have all watched and played and now seeing this situation.

Not only that, if they thought there was doubt about it then why did the game carry on for 15 seconds or so, why did they let it go on? So I can’t understand what they are doing and it is disappointing.

Aaron Cresswell, what does he give you from that position?

We changed the formation a bit tonight as Cressy went back to left-back so we had a back four but I think his form has really picked up, his confidence has grown.

I think you might need to check this bit but I am not sure if he had any assists last year, or maybe one?

This year already he has a bundle of them because his delivery has been very good. He has played mainly as a centre back that has helped him and he was excellent tonight again.

Gave a tactical masterclass to one of the “three best coaches in the world” tonight, how does that feel?

Leeds are always going to cause problems with the way they play, this game is probably different to any other game in the Premier League and we come up against some terrific teams in this league.

They have got something different which you have to cope with. I am giving praise to the players with the way they dealt with the situation, I thought their fitness was good, there are parts of the game controlled but other parts we didn’t.

We were resilient when we had to be so there were lots of good things tonight. Bielsa is an incredible manager but more importantly, he has got a style that has been picked up and broken down into bits of other coaches, he has had a long and very good career.

How far can West Ham go this season?

I can only talk about what we have done now but I thought we were quite good after lockdown, now we have improved again.

I was disappointed that we lost to Man Utd when we played well for 65 minutes or whatever it was and I just think we have got a chance.

We lost to the penalty at Liverpool, we are giving ourselves a chance and I think we have got some really good players who are playing well at the moment and I hope that continues.

Back to the penalty, what can keepers do now?

I have only seen a little bit and I can see his heel and I think they will need a microscope to see it. The bit I have seen looks as if his heel is on the line. Surely the benefit if it was on, or if you can’t make the decision, then it should go to the goalkeeper?

Not to the striker because the keeper has made the save so, the worst part was the game continued then they brought it back. I was angry with it and disappointed.