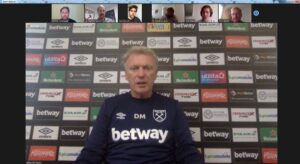 David Moyes has revealed that Angelo Ogbonna and  Sebastien Haller are getting closer to a return, both are out on the grass and training.

The manager hosting a virtual press conference this afternoon told reporters he was hopeful it could get them fit but he was not sure when exactly they would be ready yet.

On Arthur Masuaku who suffered from a twisted ankle, he said we are trying to get him back too, and that he is on the grass too.

Although he didn’t mention Robert Snodgrass, he is known to be out with a back issue possibly a slipped disc and is unlikely to back any time soon.

Asked about the three players who officially leave the club today the Gaffer repeated that he was disappointed to lose Jeremy Ngakia but that’s now been and gone. Losing Pablo Zabaleta was something he knew was coming, he is a top professional. More importantly, his career and what he achieved, medals, it was really good to work with him the Scotsman added.