Nice guy Slav is back in business 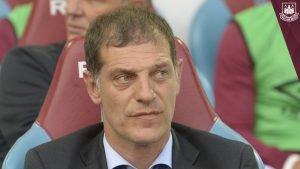 It’s the former Hammers boss’ first appointment in English football since being sacked bt the club back in 2017.

He will take over from Darren Moore who was sacked in March after bringing The Baggies to 4th place in the Championship.

Coach Jimmy Shan took West Brom into the play-offs where they were beaten by Aston Villa.

“From the moment we spoke to Slaven, we were struck by his enthusiasm and excitement about this challenge,” Baggies technical director Luke Dowling told the club website.

“He is determined to get back to the Premier League and believes passionately that he can do that with Albion.

“We believe he is a great ‘fit’ for us – his presence, experience and management qualities are just what we need.”

ClaretandHugh wishes Slaven every success. If there was ever a nice guys X1 formed we’re pretty sure he would be wearing the armband!

3 comments on “Nice guy Slav is back in business”