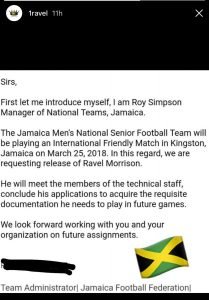 Controversial former Hammer Ravel Morrison looks to have finally turned his back on England and is ready to play for Jamaica.

The one time Hammers miisfit is currently playing for Atlas in Mexico.

And the 25 year old has now posted a letter on Instagram that appears to be the Jamaica Football Federation asking him to be released for a friendly on March 25.

It appears that he has been selected for the squad to face Antigua and Barbuda in Kingston, but as a ‘meet and greet’ session and he won’t necessarily play.

Morrison is a former England youth international but qualifies for Jamaica and actually considered representing the Caribbean island as far back as 2012.

Now ESPN Mexico report that he is keen on the Reggae Boyz and that the paperwork is being processed for the player to do so.

However, as us Irons well know nothing is ever straightforward in Ravel’s world!

← Declan Rice: John Terry is my mentor
Declan Rice: fans have got every right to not be happy →
Click Here for Comments >