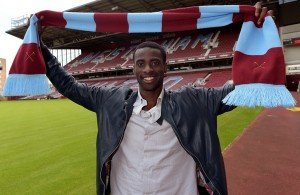 resh reports today suggest Pedro Obiang is keen on a return to Italy but the articles from Italian media have all the hallmarks of agent generated content. The latest club to be linked with 26-year-old is his former club Sampdoria.

Sampdoria is close to the signing of Pedro Obiang from West Ham claims Gianlucadimarzio.com who said the same about Felipe Anderson for six weeks before he actually signed.

The truth is Pedro Obiang is not for sale despite interest from Italy as Pellegrini has plans for him. Sky Sports previously reported that West Ham have rejected bids from both Fiorentina and Atalanta.

Earlier this week reports from Italy claimed that Atalanta had made a new bid offering the Hammers a £890,000 loan fee for a season with an option to buy worth £8m but club insiders say the club have no intention of loaning or selling the player this summer.

A club insider told Claret and Hugh this week “Obiang is not on the managers sell list, we can’t prevent silly low offers from Italy, why would be loan him as it would leave us short?”

Sampdoria have just received £26.5m from Arsenal for Lucas Torreira but it would probalby take all of that fee for the Hammers to change their mind on Obiang.