Posted by Dave Langton on February 3, 2022 in News, Whispers

Jon Moss will be the referee when West Ham take on Kidderminster Harriers in the FA Cup this weekend, per the Kidderminster Shuttle.

The Hammers take on the Vanarama National League North side on Saturday. 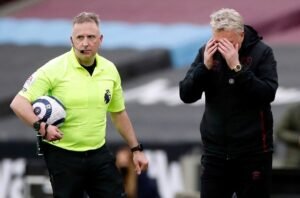 The tie is undoubtedly one of the highlights of the fourth round, with Kidderminster having sprung a shock in the third round by beating Championship side Reading 2-1 to book their tie with the Irons.

The Hammers, by comparison, beat Leeds in the third round of the tournament and Moss, who  will now take the whistle for this weekend’s encounter.

Moss has taken charge of West Ham three times this season, refereeing the club in the EFL Cup third and fourth rounds against Manchester United and Manchester City. The Hammers won the former 1-0 and the latter on penalties.

The ref was also in charge in the recent league game between the Irons and United, which United won 1-0 in the final minute earlier in the season.