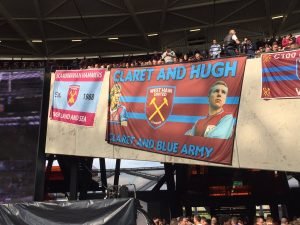 A Times report has suggested that Premier League clubs could pump artificial fan noise into the stadium if games are played behind closed doors.

German clubs are offering their supporters a chance to buy cardboard cutouts to occupy their seat with flags and banners also on display.

In today’s Claret and Hugh poll we ask whether that would work at West Ham at the London Stadium?