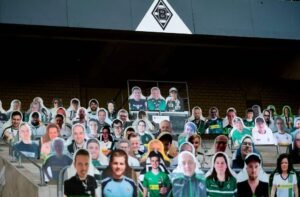 Premier League clubs are looking whether they should pump fake fan noise into stadiums for any games played  behind closed doors.

According to the Times, a number of Premier League clubs are looking into using artificial fan noise in order to create some sort of atmosphere for the players and TV cameras.
“We’ve started to give some thought internally into, ‘Could we dress the stadium?’” said Brighton chief executive Paul Barber.

“Could we make the stadium better than just blue empty seats in our case? Could we look at noise being brought into the stadium in some way, but is that really what the fans at home would want and is that what the broadcasters would want?”

Meanwhile in Germany, fans at Borussia Mönchengladbach have been offered the chance to submit a photo and ‘buy’ a cardboard cutout to be placed in the stadium, with over 1000 already taking part.

In Köln, fans and the club are reportedly working together on plans to place flags and banners in the home end to make the stadium look a little more normal.

Could this work at the London Stadium?
Permalink

One comment on “Fake fan noise and cardboard cut outs”