Randolph is fit for Saturday 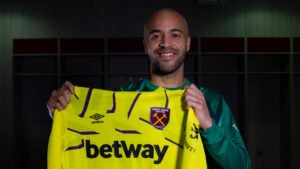 Darren Randolph will be registered in time to play for West Ham on Saturday against Everton at the London Stadium.

The 32-year-old who signed a three and a half year contract yesterday to become the Hammers first signing of the January transfer windows.  The keeper passed a medical on his third attempt despite being out injured from the Middlesbrough team since November.

Claret and Hugh have been told the goalkeeper should be available for selection and is almost certain of a match squad place this weekend.

It will be up to David Moyes to decide whether Randolph or Martin starts but we might get some clarity later today when David Moyes hosts his pre-match press conference at Rush Green at 1 pm.

Randolph hasn’t played a competitive match since 24th November but with Fabiasnki out injured for two weeks the gaffer will have a big decision whether to start Darren or David.