Posted by Dave Langton on October 25, 2022 in News, Whispers

Ex-referee Mark Halsey has backed VAR’s decision-making in the Hammers’ clash with Bournemouth.

The Irons won the game 2-0, thanks to goals from Kurt Zouma and Said Benrahma. Zouma scored a header, while Benrahma netted a late penalty after Jordan Zemura was adjudged to have handballed Vlad Coufal’s cross. 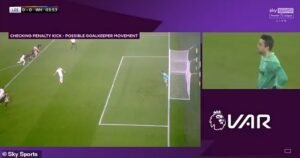 Zouma’s goal led to protests from the Cherries as Thilo Kehrer was alleged to have handled the ball in the build-up.

However, because Kehrer didn’t score the goal himself, the strike was allowed to stand; Tomas Soucek headed the ball back at goal and Zouma flicked it into the back of the net.

Zemura’s handball looked like a slam dunk and it was, as Coufal’s cross hit his hand after he made himself bigger.

Bournemouth were left angered by both decisions, but Halsey has backed both the referee and VAR for their decision making at the London Stadium.

He told The Sun in his weekly column: “West Ham’s opening goal by Kurt Zouma was correctly awarded by the referee David Coote and then VAR.

“The ball did hit the arm of Hammers defender Thilo Kehrer in the build-up.

“But he was not the scorer and his action was not deliberate as per Law 12: Handling the ball.

“Kehrer had his eyes closed and his arm was in a natural position tucked in front of his body.

“The play continued and Zouma headed home for a good goal.

“VAR official Mike Dean automatically checked the goal and agreed Kehrer’s action was not deliberate, so Bournemouth can have no complaints.

“Cherries sub Jordan Zemura conceded a late penalty when he made himself bigger and handled Vladimir Coufal’s cross.”