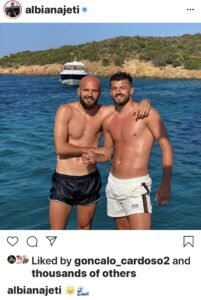 West Ham striker Albian Ajeti is close to agreeing on terms with Celtic on a loan deal according to Sky Sports.

The broadcaster claims Hoops boss Neil Lennon held further talks with the player’s agent on Thursday night with the move being cast into doubt after the 23-year-old asked for more time to consider his options, while on holiday in Sardinia.

Sky Sports News say they understand the intervention by Lennon has convinced Ajeti to choose Celtic, after a host of Premier League and European clubs were interested in the Swiss international.  Sky says the deal could be completed by early next week.

The deal on the table is thought to be a loan with an obligation to buy for a transfer fee of £4.5m.

A club insider speaking to Claret and Hugh this afternoon was in the dark with regards to Ajeti’s thought processes on a move to Celtic. The player is on holiday on the Italian island of Sardina and the club have had no contact with the player or the agent.

The striker is due to report back to Rush Green on Monday 17th August after three weeks holiday.