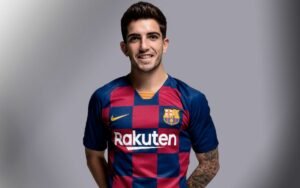 West Ham, Brighton and Italian champions Juventus have all declared an interest in the 20-year old, whose abilities have seen him compared to Barca legend Xavi. Juve have reportedly already had a bid of £18m plus add-ons knocked back for the midfielder, who is currently captain of Barcelona’s B team.

Real Sociedad, Valencia and Real Betis are also believed to be interested. Monchu scored eight goals and earned three assists in 28 games for Barcelona B as they narrowly missed out on promotion, and is believed to have been tipped for big things at the Nou Camp.

Barca are hoping to tie him down to a four-year deal at the club, but lack of first-team opportunities mean that he could look elsewhere and could be sent out on a season’s loan.

Moncho signed on until 2021 with a two-year optional addition and a 100m euro release clause. He has not debuted with the first team but Quique Setien has included him in a few squad lists.