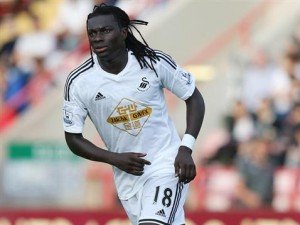 WEST HAM are this morning reported to have put in a shock £8million bid for Swansea striker Bafetimbi Gomis “as Chelsea hover Enner Valencia and Diafra Sakho.”

Journalist Alan Nixon – the first to report that Diafra Sakho was a Hammers target – writing in The Sun, says David Sullivan personally slapped in the offer for Gomis.

Swansea are said to be stunned as they had been speaking to Gomis about a deal after selling Wilfried Bony to Manchester City for £28m.

Gomis allegedly came onto our radar as Chelsea inquired about Valencia and Sakho.

Chelsea – as reported on ClaretandHugh this week –  are particularly interested in Valencia with boss Jose Mourinho ready to offer cash plus Loic Remy of whom Jose Mourinho remains unconvinced. We explained in our earlier story that Chelsea had offered £5 million plus Remy for the Ecuador striker.

The south west London outfit are reportedly also interested in Sakho who of course has hit 10 goals in just 16 Hammers games.

In a significant comment to ClaretandHugh a top insider said: “It will be a big relief to us when the transfer window closes.”

One comment on “Report: Irons bid £8m for Swansea’s Gomis”