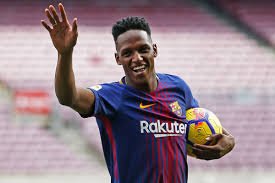 West Ham are today being reported as “plotting an ambitious raid of Barcelona for Yerry Mina.”

The defender arrived at the Nou Camp in January but has made just one appearance in the first team following his move from Palneiras at a fee of just over £11 million.

Despite the modest fee in current terms, Barca attached a £100 million release clause and the 24 year old Colombian Mina made his debut when replacing Gerald Pique in the 83rd minute of the Copa del Rey semi-final againstValencia.

Barcelona won the match 0–2 moving on to the final whilst Mina then made his home and league debut against Getafe playing throughout in the 0-0 draw.

According to reports in Spain, Mina is expected to leave Barcelona in the summer on a loan basis and with the Premier League his favoured option that the Hammers are leading the chase to sign him.

David Moyes is known to be planning a raid for central defenders and the 24 year old Colombian could fit the bill.