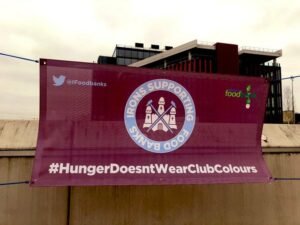 West Ham player Declan Rice has made a personal donation to Irons Supporting Foodbanks, part of the Newham Foodbank project.

West Ham season ticket holder John Ratomski, the founder of Irons Supporting Foodbanks, has called on Hammers fans to help the needy in Newham in this time of crisis. The Hammers Foodbank group were collecting food for the Newham Foodbank in Beckton before every home game before the suspension of 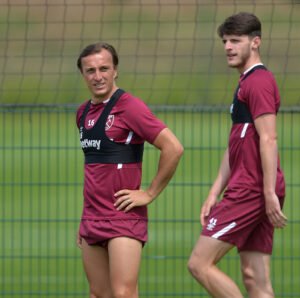 John explained that anybody who wishes to help should contact info@newham.foodbank.org.uk for further information and cash donations for food purchases at www.give.net/newham_foodbank
Diverse food donations are always welcome including lentils, basmati rice, halal foods, plus toiletries and laundry products. These can be delivered to the Beckton warehouse between 3-7 pm every Friday. Other requirements include toiletries, toilet roll, laundry products, squash (dilute to taste) lentils, chick peas. tinned meat, tuna, halal products/vegetarian, and cereals – apart from wheat bisks of which the foodbank has plenty
The online donate page is www.give.net/newham_foodbank
Permalink