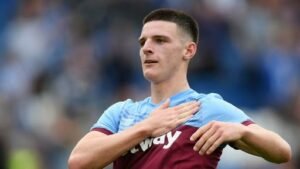 Declan is reigning Hammer of the Year

Declan Rice looks certain to be leading the Irons into the new Premier League season and their European adventure this season.

Chelsea appear to have bigger priorities than our defensive midfielder currently but thus far have signed absolutely nobody.

Whilst Roman Abramovich has authorised £150 million to be released in a bid to land striker Erling Haaland he will need to divert that money elsewhere for a front man if he fails to get the Borussia Dortmund front man.

And he also needs a new central defender and is looking at midfield prospects who would be much cheaper than the £100m million the Hammers want for Rice.

N’golo Kante has been named as a possible departure but a strong Chelsea source told CandH tonight that won’t happen and with things as they are at the Bridge right now the Rice option will in all probability have to wait.

It may be on next summer but the manager is looking at alternatives in this winter.