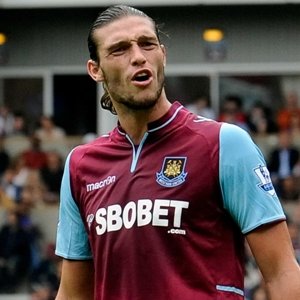 Diafro Sakho’s absence after taking a knock in training showed how integral the striker is to West Ham’s system of play against Watford this afternoon.

Two bad defensive lapses by Andy Carroll and James Tomkins saw Watford collect three thoroughly deserved points against an Irons team off of it’s game all over the pitch.

Things became considerably worse when Collins got his marching orders in the 83rd minute for a horrible challenge on striker Ighalo.

But Sakho’s relentless running of the channels to open up spaces for Dimi Payet and Manu Lazini was the biggest problem to a team who were offered little space in which to operate offensively by a well organised Hornets outfit.

Carroll handed the hosts their first goal when trying to play his way past an attacker in front of goal when he should have put a hefty boot behind it.

The ball was worked into the middle and the helpless Aaron Cresswell could do nothing but put through his own net.

It had been a lifeless first half from the Hammers with Victor Moses – back in the team – proving particularly ineffective with Zarate taking his place whilst Lanzini – a notable victim of Sakho’s absence – also coming off for Valencia.

But any hopes of a recovery were halted three minutes after the break when James Tomkins allowed a cross from Anya to pass under his boot and Igahalo rammed home the second.

The Irons had a real chance to get back into it when a terrible back pass from  Cathcart’s poor back pass was intercepted by Valencia who struck a first time shot against the post. Carroll couldn’t control the rebound and the chance was gone.

Although both teams held 50 per cent of the possession Watford managed 20 efforts on goal to our eight and had seven corners to our two.

It was a very bad day at the office and a wake up call to a team who maybe had become a victim of their own publicity.

Slaven Bilic has warned that a bad day would come along and that we have to guard against complacency – expect a different story against Everton next weekend.

ClaretandHugh was told that Sakho’s injury is only minor and that he should be fit to return for next weekend’s match.