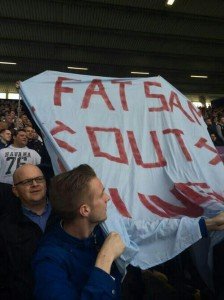 Sam Allardyce’s future will be decided at the end of the season.

The club has come to the conclusion that there is nothing to be gained by sacking the him at this stage but some very hard questions will be asked after the last game of the campaign.

ClaretandHugh has been in touch with  highly placed insiders since stories started circulating on the internet that Allardyce could be fired later this evening or tomorrow.

And we have been told categorically that won’t happen and that a decision on his future will be taken after the last game.

ClaretandHugh was told exclusively: “Nothing will happen until the end of the season. Our minds are made up on that.”

But another highly placed source admitted: “There’s a very uncomfortable feeling around Upton Park and today that spilled out onto the West Bromwich Albion terraces.

“There’s a bad atmosphere – very divisive – but you have to take the rough with the smooth in this game. However, a decision needs to be made at the end of the season. We need a united club.”