Shelvey on future as rumours continue 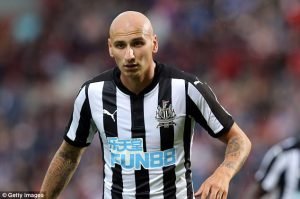 Newcastle United midfielder Jonjo Shelvey has told the Magpies official website he will stick around until he is told otherwise.

ClaretandHugh has been told by a senior insider via e mail that the player is admired by manager Manuel Pellegrini and a move for the player has not been ruled out.

However, it won’t happen if the club are successful in landing Barcelona’s Andre Gomes although a careful eye will be kept on Shelvey’s position in case that falls through.

However, such have been his injury problems the Hammers are circumspect about signing the player who admits himself he had plenty of problems in the 2018/19 season.

He said: “Last season wasn’t the best for me.

“The truth is, I got a very, very bad injury and I’m not looking for excuses but that is the reason I was out (of the team). I took a number of injections to try and get me to play games but it just wasn’t to be.

“People will write you off, but as far as I’m aware I’m a Newcastle United player and until I’m told otherwise I’ll keep fighting for a spot in this team and to show everyone how good I am.”

Regardless of that a Hammers move has been raised regularly over the last couple of seasons although it would be complicated by manager Rafa Benitez’s situation this summer.

His relationship with owner Mike Ashley has been fragile at best for months and there is no certainty that he will be at the club next season.

And until that is sorted out, any possible moves for  Shelvey will be very much on hold although negotiations for Gomes are carrying on regardless.