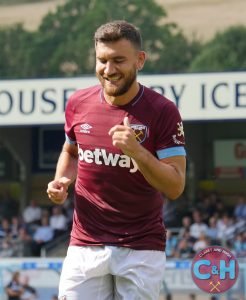 The Lockdown Tactics features discussions and interviews with big names from the world of sport, with the overriding ambition of raising awareness of mental health and encouraging everyone to look out for themselves and each other, not only during this testing period, but all the time.

“There has been a great response to Lockdown Tactics,” Snoddy told whufc.com. “It’s been fantastic for us to get the big names on there and open up in-depth conversations, not only about their achievements in sport, but more importantly about mental health.

“We have been joined by sporting idols who have interesting careers to talk about, but also powerful messages.

“It has really blown up in just four or five weeks and we’ve had a lot of people contacting us, telling us they have been helped through by listening to the podcast.”

Snodgrass, Boyd and all of their guests have shared the same message – do not be afraid to share your concerns and be there for those around you.

“The biggest things we have talked about is encouraging people to open up and speak to people, and also to check in on your friends and family,” the No11 continued.

“It doesn’t take a lot of effort to check how people are and, while it may sound dramatic, being the one who encourages that person to open up could help to save their life.

“The stories we have heard from the guests who have been on have been amazing, but our focus is mental health and every one of them has shared their own experiences.

“We try to have a laugh in each episode and make it entertaining, but there is a serious side to it.”