West Ham did not push me hard enough says Payet

Posted by Sean Whetstone on June 1, 2020 in News, Whispers 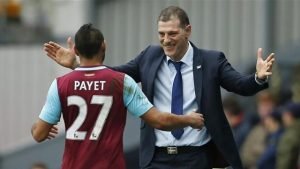 An interview with Reunion based newspaper, Payet said that he is under more pressure at Marseille, and he enjoys it better.

He said that he was not pushed hard enough at West Ham, and this contributed to his decision to quit the Hammers in 2017 under Slaven Bilic.

He said: “It’s something that I wear constantly [pressure]. This is also why I returned to Marseille.

“West Ham is a popular but modest Premier League club. When I was not good, nobody fell on me. Here, this is not the case.

“You can’t fall asleep on your laurels. Even when I’m good and the team wins, you can always fault my performance.”

Payet has hit the headlines in recent days as he refused to take a 20% pay cut from Marseille.

Marseille have had financial issues to contend with during the current health crisis, having reduced the staff pay by 30 per cent during this period

But Payet has stood by his decision to collect a full salary, with the French league having already been declared finished back in April.

‘Everyone has had their say on this matter,’ he told Le Journal de l’ile de La Reunion.

‘My position was clear and obvious. The player that I am is also the father of a family. Like everyone, I have significant financial outlays to maintain, and engagements to keep.

‘My role is to defend my interests and those of my family, without putting the club in danger, with everyone knowing how attached I am to it [Marseille].’