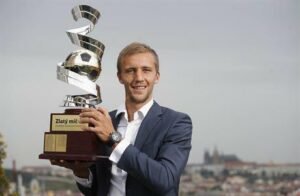 Hammer Tomas Soucek has won the Golden Ball of the Czech Republic award.

Taking to social media the year-old said ‘Thank you all for your support! I really appreciate it. I’m looking forward for the new season’

Petr Cech has won it a total twelve times in the last fifteen years while playing for Chelsea and Arsenal.

The West Ham United midfielder was been named 2019 Czech Footballer of the Year in March this year.

That makes the permanent transfer fee around 16.5m Euros of £15m.