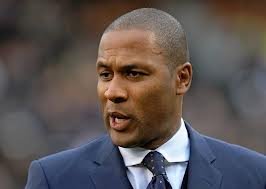 Tottenham Hotspur coach Les Ferdinand has exclusively revealed to ClaretandHugh  that reports linking him with a move to the Irons backroom staff are “news to me.”

Big Les – who spent a brief spell with the Hammers in 2003 – was named this morning in a national newspaper as being top of Sam Allardyce’s wish list to become the club’s new attacking coach.

However, when ClaretandHugh contacted Les this morning his baffled response made it clear he hadn’t a clue how such a story had surfaced.

He said: “I’ve been away playing golf and have only a sketchy idea of what’s going on at Upton Park – what job is supposed to be available .”

When we told him that he had been named as “top of the wish list” to take over as the new attacking coach he gave a big chuckle.

He said: “I had no idea the club had decided to go in that direction – all I heard was that Sam was staying but nothing more specific.”

He added: “I don’t know what’s happening at Tottenham now that Tim is no longer a manager but we have always been a team.”

The report had claimed that ‘Allardyce would welcome Ferdinand, the first striker to reach 100 Premier League goals without scoring a penalty, to his backroom staff.’

And it added that he was seen as a man who ‘could help bring back the swashbuckling style that Upton Park supporters are crying out for.’

However Les told us: “I have not been approached and didn’t even know there was a job available anyway – if things change I’ll give you a bell.”