Teddy is the most qualified

Claret and Hugh understands that Teddy Sheringham will soon be announced as West Ham’s new attacking course after agreeing terms for the new role. 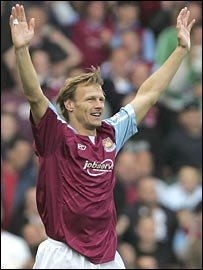 Teddy is believed to already hold coaching badges for FA Levels 1, 2,& 3 which includes UEFA level  B.  Level 4 is the next step for Sheringham and the club are thought to sponsoring Teddy to finish competing his UEFA A license.

The cost of a UEFA A license now in excess of £3,000 and he is thought to have been booked in on the next available course with the Irish F.A.  EUFA rules restrict the frequency of  courses to once every two years  for each organisation so coaches will often travel to where the next course takes place.

A source close to West Ham told Claret and Hugh that ‘Sheringham was the obvious choice because of his West Ham connection, coaching experience and the badges he has already achieved’

Tony Cottee, Dean Ashton and Ian Wright are all believed to have been interested in the role but didn’t hold the correct coaching badges.