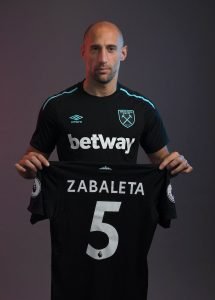 From Arrecifes, Buenos Aires, to the stage of London Stadium – via glory with Espanyol, Lionel Messi, the most dramatic of Premier League titles and the small matter of a World Cup Final – there are few sights in football that serial winner Pablo Zabaleta has not witnessed.

Born in Buenos Aires, Zabaleta was raised in Arrecifes. He began his career at Club Atlético San Lorenzo de Almagro in 2002 after progressing through their youth ranks, having been signed at the age of 12 from local club Obras Sanitarias. He started playing as a defensive midfielder but eventually moved to the right side of midfield.

Zabaleta was transferred to Espanyol in 2005 for €3 million after being Argentina under-20s captain in the 2005 FIFA World Youth Championship, which Argentina won. During the 2005–06 season, Zabaleta helped Espanyol to win the Copa del Rey, playing the full 90 minutes in the 4–1 defeat of Real Zaragoza in the final.

In the summer of 2008, Zabaleta transferred to Manchester City after rejecting an offer from Juventus. He stated upon joining that “The offer is impossible to reject and not just because of the money … Juventus also wanted me but I wanted to come to England, and to Manchester.Having passed a medical and agreed personal terms, Zabaleta completed a five-year deal with City on 31 August 2008 for an undisclosed fee, believed to be the buy-out clause Zabaleta had attached to his contract of around £6.45 million.Zabaleta joined a day before Manchester City was bought by the Abu Dhabi United Group, led by Sheikh Mansour, which enabled a wealth of investment in the club.

In May 2017, Zabaleta signed for West Ham United on a free transfer, agreeing to a two-year contract. He was given number five as his squad number

In May 2019, Zabaleta extended his contract with West Ham Until the summer of 2020. On 5 January 2020, Zabaleta scored his first goal for West Ham, in a 2-0 win against Gillingham in the FA Cup third round On 10 January 2020, in a match against Sheffield United, Zabaleta became the first Argentinean, and only the third South American, to record 300 Premier League appearances.

He is due to retire from Professional football when his contract with the Hammers expires at the end of June this Summer.