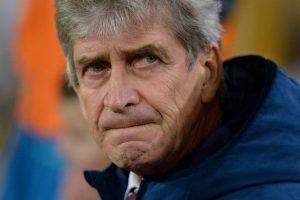 It’s the oldest cliche in the book but the reality is we were robbed tonight!

A seriously poor penalty box decision by referee Stuart Attwell who reckoned Felipe Anderson clumsy bump on Bernardo Silva was worthy of a pen turned out to be the difference between the two sides.

It sent shock waves around the Hammers faithful matched only by the waves of relief from City’s fans who had watched their team locked out by a seriously strong Hammers defensive performance.

Thank goodness VAR is on the way but if we are entirely honest this shouldn’t have needed technology ( or TV replays) as it simply wasn’t a foul.

It left the Hammers players arguing their case furiously but in the end it was all to no avail with Sergio Aguero giving Lukasz Fabianski absolutely no chance with the perfect spot kick.

And on a night when City dominated there was no way back for the Irons who had shown real guts all night.

Manuel Pellegrini told the BBC: “”I’m very happy with how the City fans received me. I’m very pleased with what they said.

“I’m not happy with the result because it was not a penalty. Bernardo Silva threw himself down when he felt a touch. Lanzini had the same thing but didn’t go down, so the referee didn’t whistle.

“The first intention was to play with Marko Arnautovic, but he woke up sick this morning. With three fast players in attack I felt we could have done more damage.

“The penalty was decisive for the result.”