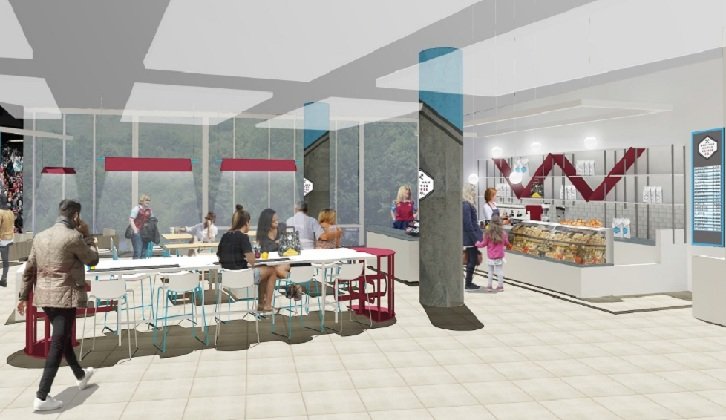 The West Ham United Coffee Company will be founded at the Olympic Stadium this summer.

The Claret and Blue-themed coffee house will be situated inside the new Stadium Store at the Club’s new home on Queen Elizabeth Olympic Park, right outside the Hammers new 60,000-capacity Stadium.

The shop will offer bespoke coffee beans and brews alongside other refreshments supplied by American catering partner Delaware North served in décor depicting the biggest names in Hammers history.

The Cafe has has designed and fitted out by agency 442 Design.

The surroundings will see fans pick their chosen cuppa from a unique Scoreboard Style menu board, before taking their seats in a feature dining area that draws on everything that is great about West Ham.

The centrepiece of the dining area will be a ‘Dream Team’ table, which utilises a set of turnstiles from the Boleyn Ground providing a timeless link between the Club’s old and new stadia, featuring the names of eleven players and a manager, the identities of which will be picked by fans in the near future!

Smaller tables and perch benches will be covered by images of Hammer of the Year winners and historical facts, figures and quotes, while wall graphics will show images of the Claret and Blue Army.

← West Ham do the double over Spurs in a week
Poll: Will West Ham beat Manchester United? →
Click Here for Comments >