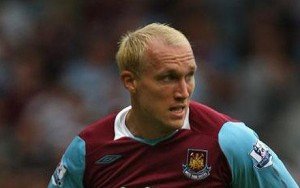 Dean Ashton’s was a c lub-record signing when he moved to West Ham United in January 2006 from Norwich City, Ashton managed 19 goals in 56 appearances for the Irons, before his career was ended early due to injury.

Although the striker’s West Ham spell was brief, Ashton netted some more than noteworthy goals for the Hammers, of which two, in particular, stand out to the former England attacker.

“My most memorable one is the tap-in against Liverpool in the [2006] FA Cup final,” Ashton recollected, with a smile, while watching back his West Ham finishes. “My best ever goal! Worst ever goal or best ever goal, depending on how you look at it.

“The FA Cup final, the biggest game of my life, Pepe Reina spills it and I tap that one in!”

← Di Canio calls for West Ham unity
Poll: Who has been the best West Ham captain? →
Click Here for Comments >