West Ham membership for a quid

Posted by Sean Whetstone on February 17, 2018 in News, Whispers 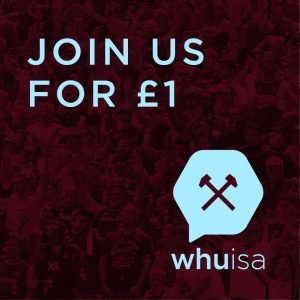 The West Ham United Independent Supporters Association – WHUISA has reduced the cost of membership to just £1!

The association says their aim is to provide a democratic, fully independent and self-funding structure through which all West Ham fans can voice their opinions without censure on matters that are important to us as well as express their support of our Club.

WHUISA says they are a non-partisan, not-for-profit organisation run by the fans for fans. They believe that by coming together under a single banner the myriad of opinion / views from all our fan base especially at this crucial time in our history they can move forward together as a strong group with a real mandate from the fans to have a pivotal influence through frank and open channels of communication, based on mutual respect and accountability, with our Club, its owners, the board and Stadium / 3rd party operators.

At the beginning of February WHUISA announced their support of action groups, a Statement read: 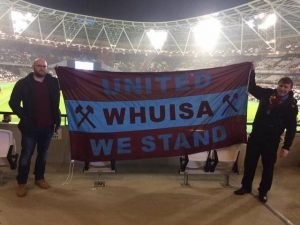 “The committee of the West Ham United Independent Supporters Association (WHUISA) would like to formally announce its intent to support the efforts of the Real West Ham Fans Action Group (RWHFAG) & West Ham Groups United (WHGU) for the proposed protest march that is currently planned for 10th March 2018.

WHUISA has sought dialogue with West Ham United in the past and continues to do so to give representation for the fans, to the current ownership of our football club on a wide range of issues. It is disappointing that to date, there has been a lack of willingness from West Ham United to engage proactively and any communication with WHUISA only seems to be reactive to issues and situations
that have arisen. 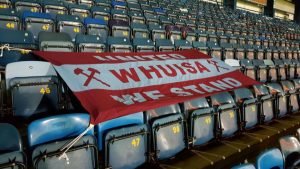 Protesting by away fans at the Watford FC away game on Sunday 19th November is one example where the club then reached out to WHUISA to attend a meeting to discuss concerns, whilst other attempts to meet had been rebuffed. Preferred media outlets and individuals are considered more important for engaging with, rather than a democratically run, fully constituted, Football Supporters Federation affiliated independent supporters association.

WHUISA has been in contact with RWHFAG & WHGU a number of times in the past month and are happy to formally support the efforts being made to arrange a family friendly, peaceful demonstration where the strength of feeling and emotion regarding the current situation at West Ham United is to be made plain for all to hear and see.

The protest march is currently being discussed between representatives of the Metropolitan Police and RWHFAG/WHGU in terms of duration, location and timings and more details will be announced once those discussions have been completed. All WHUISA members are encouraged to attend the planned protest on 10th March 2018 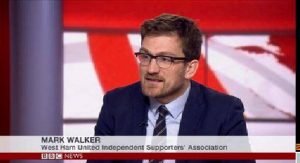 WHUISA Chairman Mark Walker speaking to Claret and Hugh today about the reduction in membership to a quid said: “We’re delighted to reduce the membership to a pound for the rest of the season and it’s something we keep under review going forward. We want as many people as possible to get involved in WHUISA. We take our affiliation to the FSF seriously and want as many people as possible to be involved, regardless of what other West Ham groups and forums they are members of.”

You can join WHUISA for a quid at https://whuisa.org/join/
Permalink

3 comments on “West Ham membership for a quid”