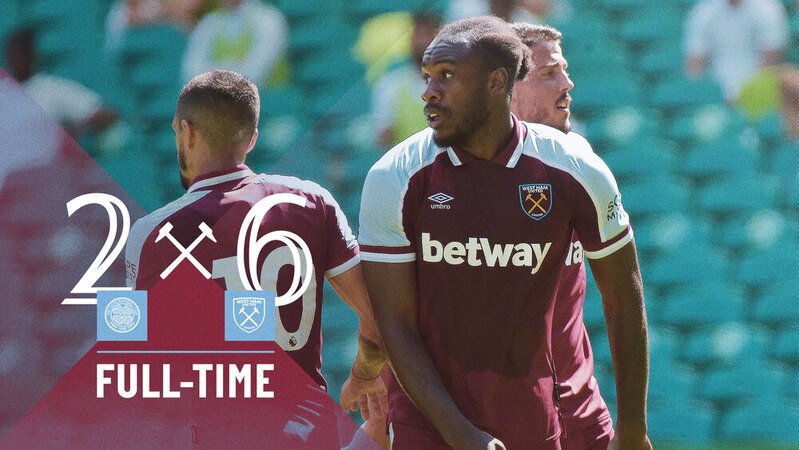 The Hammers went one-nil down in the pre-season friendly with Celtic skipper Callum McGregor slotting one past Fabianksi due to an unfortunate mistake by Manual Lanzini.

Angelo Ogbonna went down injured after five minutes clutching his thigh and was immediately replaced by Issa Diop but hopefully, the change was  precautionary.  Both Michail Antonio and Jarrod Bowen were denied  by terrific saves by Celtic stopper Vasilis Barkas.

Antonio looked very sharp and was too hot to handle scoring his first goal of the afternoon after just 23 minutes. Noble played the ball  into a wide gap between the centre-backs and Mikey had time and space to collect, dribble past Barkas and slot into the net with his left foot.

Nine minutes later and Antonio scored his second with a second on 32 minutes with one-touch football from Lanzini and Benrahma which found Fornals who played the ball into space between the centre-backs.

Antonio raced onto it and Barkas had his positioning all wrong, allowing the  new No9 to slot inside the left-hand post with his left foot.

It was Antonio’s pace that led to the Hammers third goal when he was brought down and skipper Mark Noble converted a straightforward spot kick.

Celtic came back into it in the second half after a mistake by Ryan Fredericks and Darren Randolph made it 3-2 but it was all one-way traffic after that.

West Ham broke again at a devastating pace  with Celtic seemingly unused teams countering on  the break.
Antonio put a ball to Fornals, who picks his pass through a defender’s legs and finds Benrahma in acres of space 35 yards out.
He left keeper  Scott Bain on the floor before slotting home. A well-composed and taken goal to make it 4-2!
The Hammers got their fifth on 74 minutes with another great goal. Ben Johnson got forward and crossed at hip height where Benrahma flicks the ball on first time and Jarrod Bowen did likewise, volleying neatly inside the far post for his own deserved goal.
Five minutes before full-time 19-year-old Armstrong Okoflex who joined from Celtic earlier this summer got on the score sheet.
His cross for  Bowen blocked, so took matters into his own hands and  and planted a left-foot shot across Bain and into the bottom corner!  Celtic fans start to leave the stadium, they have had enough humiliation in one afternoon!
A great West Ham performance and a final score of 6-2 when the final whistle was blown. Come on you Irons!
Permalink

← Lingard out to prove a point at QPR
6-2 as Moyes does what he said he’d do! →
Click Here for Comments >