Zarate sent off for love bite

Posted by Sean Whetstone on February 15, 2016 in News, Whispers 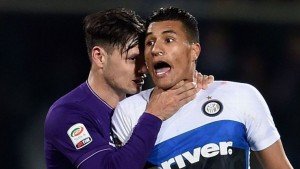 Former Hammer Mauro Zarate was sent off after grabbing and possibly biting Inter Milan’s Jeison Murillo by the neck on Valentine’s day evening.

However Zarate claims he was punched twice during the scenes that marred the end of Fiorentina’s 2-1 win on Sunday night. After Khouma Babacar scored the winner in stoppage time, Zarate initially refused to give the ball back to Inter. A scuffle ensued, and Zarate was sent off after grabbing Inter’s Jeison Murillo by the neck.

Zarate apologised for his red card in a message on Twitter, but he claimed he had been assaulted before he was sent off. “Apologies to the television viewers for the ugly scenes!”

“Three points and still third! I am very happy, shame about the red, but when you receive two punches from two different players it is difficult to stay calm. Obviously I should not react even in these situations. Forza Viola.”

I know it was Valentine’s day yesterday but Zarate took it too far as he tried to nibble an opponent’s neck pic.twitter.com/7gHP055Vpv

2 comments on “Zarate sent off for love bite”