Aaron Cresswell in tunnel bust up 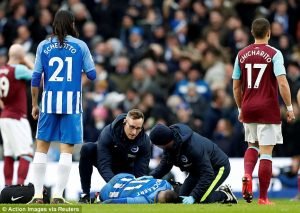 West Ham defender Aaron Cresswell and Brighton forward Anthony Knockaert were involved in a heated tunnel bust-up on Saturday. Reports suggest the pair had to be separated just moments after the half-time whistle was blown as both teams headed back to their dressing rooms. Team-mates intervened to de-escalate the clash before the confrontation turned physical.

Knockaert was said to be furious with Cresswell’s first-half challenge that left the Brighton attacker needing lengthy treatment.

When asked about Cresswell’s tackle on Knockaert, which earned the Hammers left-back a booking, Brighton manager Chris Hughton said: ‘I’ve seen I think it was a bad challenge.’

David Moyes, when quizzed about the incident by reporters, said he knew nothing about it, I would tell you if I did but I honestly know nothing. I am not saying it didn’t happen I just don’t know.
Permalink

One comment on “Aaron Cresswell in tunnel bust up”