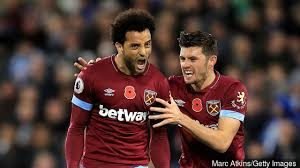 Real Madrid have made no contact with West Ham over the suggested possibility that they could move for Felipe Anderson.

Sky Sports News ran a story this morning suggesting the Spanish giants would make a move for the Hammers Brazilian star should they fail to sign Chelsea’s Eden Hazard.

The media outlet reported that a £60 million bid had been rejected by Chelsea and whilst the figure seems very low the Belgian midfielder is out of contract next July.

SSN followed up by saying that if they fail to get the Chelsea star then Anderson would be their target although there were no quotes from any sources to back up the claim.

ClaretandHugh contacted a senior London Stadium source and was assured that at this stage there was nothing in the story as far as they were concerned.

We were told: “We’ve had no approach for any player from any club.”