Andy Carroll will thrive next season

Should it happen, it will be a sight for sore eyes to possibly see Wayne Rooney playing off him. At that stage we will truly see the big fella’s abilities being used to the max.

Andy showed in the 2-1 defeat to Liverpool just what a handful he can be against the very top sides and the game changed when Reds boss Brendan Rodgers put two players on him in the second half. That Liverpool needed to do that, suggests to me that this is a striker to die for.

Some would like to believe that referee Anthony Taylor’s very odd decision-making processes had the real bearing on the outcome of Sunday’s game – not so in my view.

Sure, some of it was as bizarre as it gets but, in real terms, there was no disputing the first Liverpool penalty when James Tomkins handled.

And it was quite clear from replays that Guy Demel’s equaliser should have been ruled out after Carroll interfered with keeper Simon Mingolet’s vision.

Liverpool’s second penalty was a straight 50/50 challenge between John Flanagan and Adrian – no spot-kick and thus the final score would have been t 0-1.

During all of this controversy – along with probably unwise screenings of the Carroll/Mingolet incident – Andy showed himself off to very good advantage but always without a natural partner.

So one big question remains. Why oh why does he not have a serious partner to feed off all those wonderful knock downs and knock-ons which, currently, he appears to be chasing himself?

There’s a growing acceptance – even among those who love to knock him as being one dimensional – that this is a player who has a lot in his game. That he causes problems is a given. He could cause many more.

Given a speedy partner, or at the very least, midfielders who are getting alongside and ahead of him, West Ham might have been deadly this season.

But time and again, however, we have seen him producing flick-ons to nobody but himself and thus it’s difficult to see how we are getting value for the £16million we reportedly spent on him.

Personally I’d be utterly stunned were England boss Roy Hodgson to go into a World Cup match having named AC in his line-up without providing him with a natural partner. It really doesn’t make much sense and I hope and pray we expand our striking options in the summer.

Antonio Nocerino has demonstrated, very capably, that he’s unlikely to be an option for us and nor is Carlton Cole who is far too similar to AC, so let’s hope the scouts are out.

Quite apart from anything else, we can’t rely on Andy remaining fit for the entire campaign and in my view we need a least two more strikers bringing us up to four as we can’t really include Modibo Maiga, can we?

The Hammers played with a lot more freedom and flexibility at times on Sunday and fair play to the manager for that.

The co-owners have said they want to bring in three or four players and on Sunday’s display Pablo Armero could be one of them at around £3-£4million.

An interesting summer is ahead with the emphasis on the front line – that’s where the game is won after all. 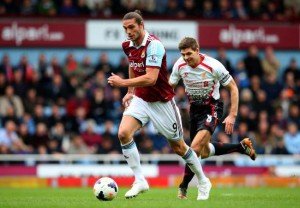