Baldock: “I was not suited to Hammers style.” 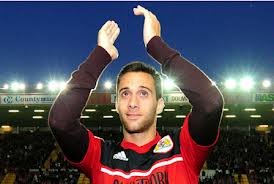 The striker was allowed to leave the club after we won promotion via the Championship play-off final in 2012,

Now at Bristol City, he has enjoyed the best goal scoring season of his life winning the League One Golden Boot having netted 24 times.

He was handed the captain’s armband at the start of this season and told the local newspaper how he came to leave the Irons for the south west.,

He told the Bristol Post: “I was told I was not going to play and no footballer likes to be told that. I don’t think I suited the way Sam Allardyce wanted to play and he was honest enough to say that to my face.

“He said I was an honest boy who needed to play football and I respected him for his honesty. In hindsight, I think he was right. I certainly wouldn’t have played as many games as I have here had I stayed at West Ham.

“I’ve scored more goals at Bristol City this season than in any other season and I wouldn’t have had those career stats had I not come here two years ago. I have no regrets.”

Baldock may have missed out on top-flight football with the Hammers, but he still harbours ambitions to one day play in the Premier League. And he sees no reason why he cannot make his dream come true with City.

He said: “Outsiders have done it in the past two seasons in the form of Burnley and Crystal Palace and I don’t see why we can’t.

No one would have backed either of those clubs going up, yet they are in the Premier League against all the odds.”