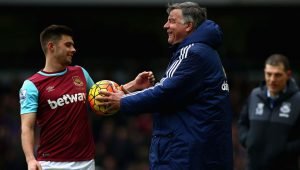 A report in the Sun newspaper claims that Sam Allardyce will attempt to make a £25m bid for West Ham’s Aaron Cresswell this summer.

According to a Sun on Sunday source, the Liverpool-born 28-year-old is keen on a return to his hometown – although he has previously admitted to being a boyhood fan of the Reds.

Cresswell has made 150 appearances as a Hammer in all competitive games since joining.