Boleyn Ground to be blown up tonight 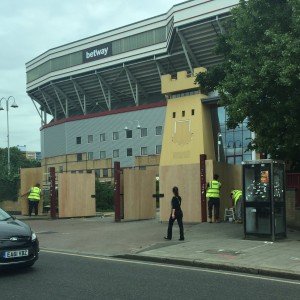 Two large explosions – complete with large fireballs – are set to happen in West Ham’s former stadium at the Boleyn Ground tonight and again on Sunday.

The two controlled blasts are part of a forthcoming Hollywood action film called Final Score that is being shot in the football ground now owned by developers.

A letter seen by the Newham Recorder from production company Drybake tells residents of Green Street: “There will be a very large bang and then a controlled fireball within the stadium that will last a few seconds.”

The detonations will occur between 9pm and 10pm, and an airhorn or siren will go off beforehand to alert anyone in the area.

The film’s producers advise people “to stay away from windows facing the stadium as soon as you hear the warning airhorn between the aforementioned hours,” and suggests keeping pets indoors.

The letter explains “the explosions are designed to create a visual effect similar to a real explosion but without the accompanying blast damage”.

It assures residents that the work will be carried out by “an experienced visual effects team”, fire cover will be in place, and the police have been informed.

One comment on “Boleyn Ground to be blown up tonight”