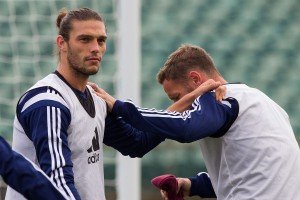 Andy Carroll has confirmed the progress he has made over recent weeks as he battles to return to action from an ankle injury.

And he confirms most of the revelations given on ClaretandHugh last week.

We had explained that he was out of his surgical boot, doing light running and that he was looking for an earlier than expected return on October 25.

And whilst steering clear of predictions, the big striker makes it clear that he’s stepping everything up.

Speaking to the official site at www.whufc.com he added that he had been to Baltimore for the op which was “well needed.”

He is now running in the open air which he explained felt much better than the gym and had given him a boost.

He admitted he doesn’t like giving interviews which shows how keen he is to be back.

He said: ““I don’t like doing interviews anyway, so to be doing them and talking about injuries is even worse!

“Seriously, I can’t wait to be back and not having to talk about this sort of thing.”

Go to www.whufc.com for the full interview