Posted by Sean Whetstone on April 18, 2019 in Sean's Blogs, Whispers 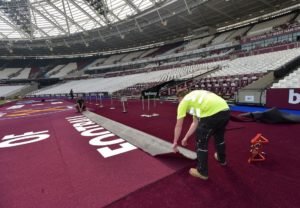 The news that Saturday has been designated Claret and Blue day by the club has been met with some bemusement by some Hammers supporters.

On the same day that our London rival Spurs made the Champions League Semi Final beating Manchester City in an exciting game, the club revealed that the new Claret carpet will be proudly unveiled this weekend complete fireworks and a Claret crowd surfing banner.

Some supporters are feeling the new pitch surround is completely over-hyped and has been oversold when in reality it is only one small step in the London Stadium feeling more like West Ham’s new home.

What the club fail to see is the embarrassment it causes the fans and the joke material it gives to rival supporters who can’t wait to ridicule us.

Personally, I would have made it a much lower key affair and may have not said anything at all, one day it was Green, the next day it was Claret, so what!

Sadly it indicates the club is still out of touch with the fan base and what makes us tick,  a Claret track over is not the season’s crowning success I am afraid. Next to move on!

9 comments on “Claret carpet opening ceremony is over hyped”