Club in talks for Hammers man

Torino are said to be in talks to sign Nikola Vlasic from West Ham permanently, but there’s a catch.

The Serie A club took the Croatia international on loan in the summer and the deal includes a purchase option worth €15m, or £12.8m. 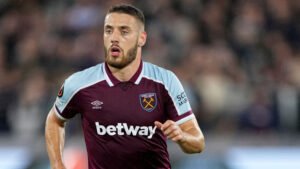 While that may feel like quite a small number for the Hammers, it is a major amount for Torino; they have only paid that kind of fee for three players in their history.

As a result, a report from Torino Granata makes it clear that the club want to bring the figure down and are in talks with the Hammers to do just that.

They are not said to be willing to pay £12.8m for Vlasic, despite his impressive form at the club, and want to lower the figure, although it isn’t clear to which kind of figure they want to go to.

Still, an agreement was put in place and one has to think that Torino need to honour that agreement.

3 comments on “Club in talks for Hammers man”