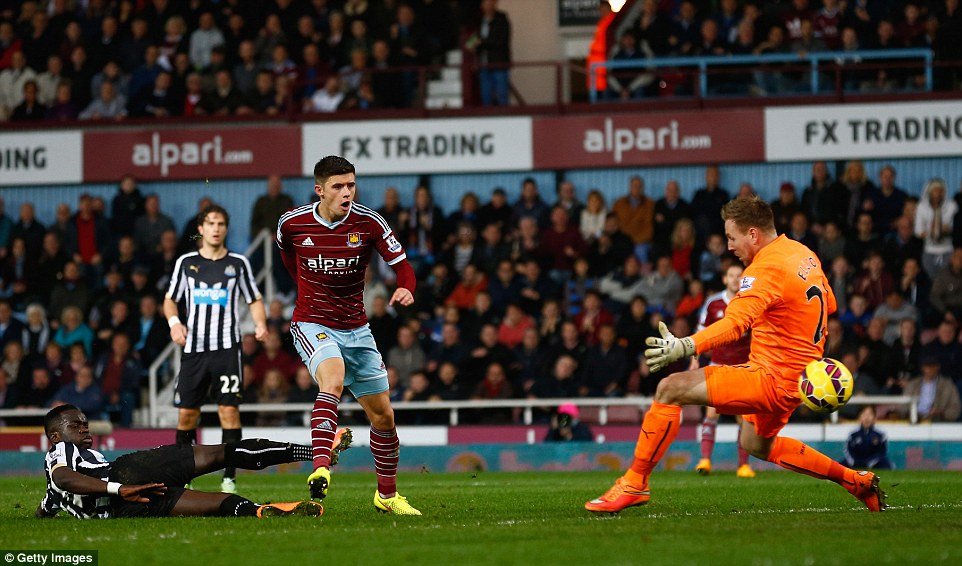 Aaron Cresswell scored his first goal in a Hammers shirt to set the team back on winning ways.

And after failing to win their last three games the victory came as sweet relief for the Upton Park army who were treated to a decent second half after a dreary first 45 minutes.

Interestingly, on a day when Sam Allardyce opted to go with Andy Carroll in a lone striker role, the goal came from the great ‘to feet’ football which has been a feature of the team’s displays this season.

It came in the 56th minute when Downing played a neat ball to Kouyate, who slipped it on for the left back to fire home before wheeling away in celebration.

Allardyce had oped to play Carroll up top with Morgan Amafitano seemingly his “partner”  in a dull first half but that didn’t work at all and it wasn’t until the two full backs Jenkinson and Cresswell pushed on after the interval that the team gathered some real impetus.

If there was a criticism it was the long delayed arrival of a player with real flair and imagination – he has to get more game time!

He could have had a goal of his own in the 88th minute when after producing a great step over, he slammed in a shot which error-prone United keeper Elliott did well to save.

The Hammers’ cause was helped greatly by acts of sheer stupidity from Newcastle’s Sissoko who a mere 30 seconds after punching the ball away, chose to upend Carroll and received a second yellow which saw the visitors play out the last 18 minutes with 10 men.

The Magpies had their moments when danger man Perez shot wide early on and caused the Irons defence some worrying moments.

But we more than held on at the end to push ourselves back into fifth place behind Chelsea, Southampton, Manchester City and Manchester United and still ahead of Arsenal and Spurs.