Declan and England have a night to forget

Posted by Dave Langton on November 25, 2022 in News, Whispers

Declan Rice and England had a night to forget against the USA.

The Three Lions drew the game 0-0, in what was a dour, dismal game of football. 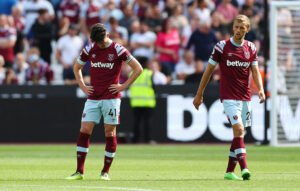 So many clashes in Qatar have been exactly like this, with each team failing to find a way through the other.

Rice looked completely overwhelmed in midfield, to the point that Gareth Southgate had to bring Jordan Henderson off the bench to regain some control of the middle of the pitch.

Declan did pass the ball well but he looked overawed defensively and was guilty of a dire performance, much like many of his team-mates.

Gareth Southgate’s side were too turgid and failed to truly stretch their opponents, in what was a remarkable turnaround from the vibrant football involved in beating Iran 6-2.

This was a woeful game, and England will now need to avoid a heavy defeat by Wales to guarantee qualification to the knockout stages of the World Cup.

3 comments on “Declan and England have a night to forget”