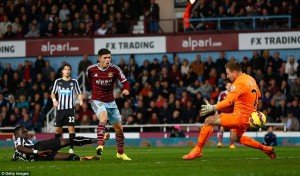 David Gold reckons Aaron Cresswell may become the buy of the season and declares: “There’s so much more to come from him!”

Cresswell cost the Irons £3.75 million from Ipswich and inside 22 Premier league games is now freely discussed as an England probable.

In total he has made 24 appearances and is an ever present in what some originally saw as a season of adjustment.

But no adjustment has been necessary. Cresswell has been outstanding and with Stewart Downing and Diafra Sakho is among the front runners for Hammer of the year.

Gold could not be more impressed saying: “Aaron has been fantastic and I really believe there’s a lot more to come.

“He got his goal against Newcastle (seen above) and has gone from strength to strength. The boy has so much in his game. At the price he is turning into one of the bargain buys of the season.

“It shows that there are players out these playing in the Championship who can make the step up. It’s all about the scouting network you have in place.

Aaron has been brilliant for us and to say we are all delighted with him really would be something of an under-statement.”

One comment on “DG thrilled with Irons “bargain buy””