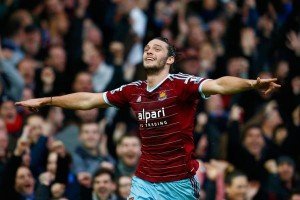 Andy Carroll is coming more and more under the Teddy Sheringham influence!

Carroll reacted in a heartbeat after partner Enner Valencia’s shot had been parried by Allan McGregor to poke hime a goal.

And speaking to www.whufc.com he said that he and Sheri on his positioning and anticipation inside the penalty area.

He said: “That’s what we’ve been doing in training with Teddy – a lot of finishing and following-up That is just another one of his sessions which happens, with Enner shooting and me following in and I had a little tap-in.

“I don’t normally score many of them, so it was nice to get one! I feel good and five goals in eight games sounds good, so hopefully there is a lot more to come.”

2 comments on “AC thanks Sheri!”