Dicksie’s ladies give him an effing shock! 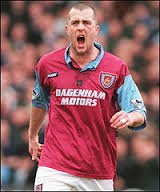 Julian Dicks has been stunned by the language he’s hearing from his West Ham Ladies Team.

They don’t come much tougher or outspoken than Dicksie but he said:  “I swore a lot as a player but have to admit they swear more than me. I was quite shocked. It’s not what ladies do is it?

“There are some that, if they make a mistake on the pitch, it’s a stream of F-words. They aren’t afraid to put a hard tackle in.

“One or two of them will put their feet in and if they get a yellow card or a red so be it.

“I know what I was like as a player and I expect them to give me 100 per cent in every training session and in every match.

“I want them to be as determined as I was and you can’t really coach that.”

The 20 volunteers in the squad trains three times a week for two hours and plays in the third tier of women’s football — semi-pro Manchester City are in the Super League top flight.

But West Ham will still face the likes of London rivals Tottenham when the league season kicks off later this month.

Dicks told The Sun: “They don’t get paid and they have to pay to play home games at Thurrock. Things like that must change to turn us into a proper team.

“For example, in City’s ladies’ team there are five professionals. They get first-team treatment — kit looked after, their boots, a team coach to away games.

“We can’t compete with that but we need to get more organised and I’m hoping we will.”

He added: “With the women there’s no diving. No rolling about pretending to be injured.

“When you compare that to some of the pathetic behaviour we saw from men at the World Cup it is so refreshing.

“Some of the play-acting was disgraceful. You won’t be seeing that from my ladies.”